Today, talk about hotel automation means dealing with an evolving and highly advanced system, where the latest developments in the technology field are involved to make hotels most comfortable, safe and reliable.

Ave’s hotel automation expresses all these ideas and expands them in the broadest sense of the term. The Ave’s system allows to increase the comfort for guests, the safety of buildings and – not least – to make your hotel more organized and optimized both at management and energy level.

DOMINA Hotel agrees a greater efficiency, which has as direct consequence lower costs for owners and greater benefits for customers. Therefore, choosing DOMINA Hotel means relying on an advanced system, on a human scale which – thanks to its scalability – can be expanded to adhere to the needs of those who live there: hotelier, staff and guests.

ONE SYSTEM FOR ALL NEEDS

Hotel automation opens the door to endless possible applications. The integrated functions of Ave’s hotel management software are thought to adhere to the needs of any hotels. The same software has been designed in three different versions in order to adapt in any situation where is installed. Small, medium and large hotels can now count on an advanced scalable supervision tool that allows an intuitive control of the building and its rooms. In case of hotel’s enlargement or integration of new features, it will be readily increased through the adoption of new software. DOMINA Hotel will respond to any need.

DOMINA Hotel is available with a “stand-alone” solution, which does not include the supervision of of the rooms from the reception, or in the “network” solution, where each room can be monitored by the central computer of the reception, allowing you to reduce inefficiencies and optimize the management of energy consumption, thus achieving significant savings.

You can expand exponentially the functions’ range of your hotel. DOMINA Hotel can be combined with the Ave’s home automation system DOMINA plus (touch screen, controls, actuators and alarms) to build a hotel that meets all your requirements.

Thanks to a special software interface, DOMINA Hotel is integrated with the payment system “Opera” by Micros Fidelio and centralized air conditioning systems VRV / VRF of “Daikin” and “Mitsubishi”. Through the supervision software, the hotel automation can also integrate Ave’s fire detection systems allowing the visualization of system alarms and fault messages coming from their devices (sensors, detectors, etc.). 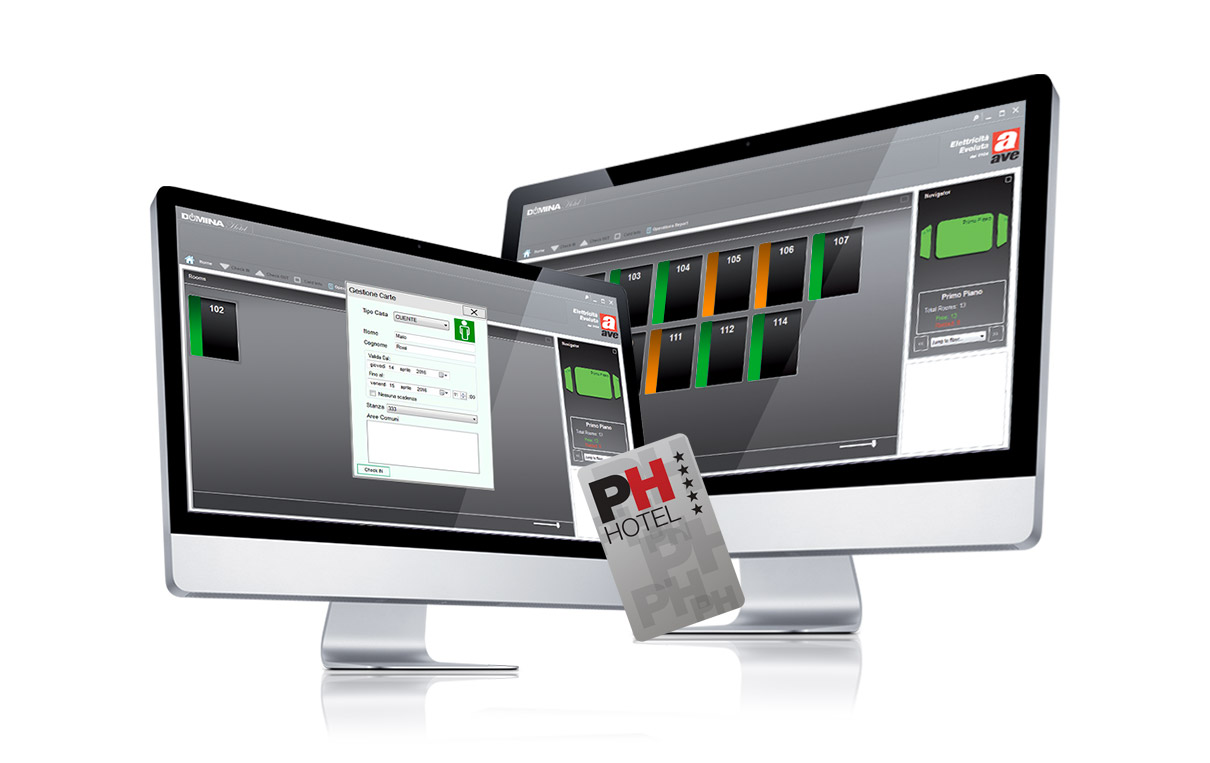 Ave’s products for hotel management adopt the contactless MIFARE® technology. This means that the cards used to access are completely safe and unclonable, ensuring you and your customers the certainty that no one will harm you. The ability to integrate into each card payment systems (not supplied by Ave) will allow you to offer your customers a range of absolutely new services, accessible simply through a single personalized access card.

THE TECHNOLOGY OF THE SYSTEM

To explain what is hotel automation, it is necessary to start with the definition of “BUS”. This term generally refers to a set of all devices connected to the same and unique channel of communication. The main purpose of the BUS is to achieve the most simple physical and logical connection between the devices, minimizing both the number of wirings and the time required for the implementation of the system.

In a hotel automation system, each device has the ability to send and receive sequentially electrical signals that represent information or encoded messages according to a specific protocol that – for DOMINA automation system – is called “AVEbus”, a proprietary protocol available for system integrators.

The recipient’s identification of messages takes place through an addressing that is an integral part of the same messages. This address is assigned to each device by a configuration usually done via software. By means of this configuration, a control device and an actuator device that have the same address are “logically connected” to each other.

Do you want to know more about our automation system?

OUR AUTOMATION SYSTEMS INSIDE HOTELS